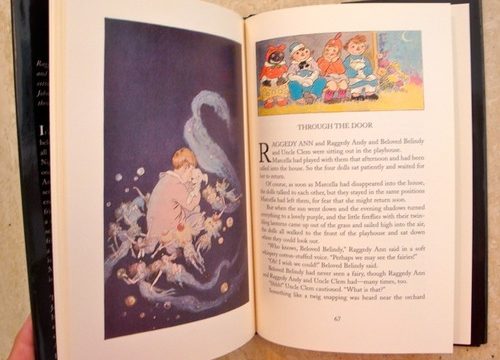 Raggedy Ann was inspired by a father’s love for his daughter.  Marcella, the daughter of Johnny Gruelle, had an old rag doll from her grandmother.  She had black shoe-button eyes,  red yarn hair; and a face newly painted on by Marcella’s father.  She was her favorite doll.  In 1915, Johnny – who was a professional illustrator and writer – created a doll based on this one and called her Raggedy Ann.   In May and June of that same year, Johnny also applied for a patent for the doll and a trademark of the logo, “Raggedy Ann.” 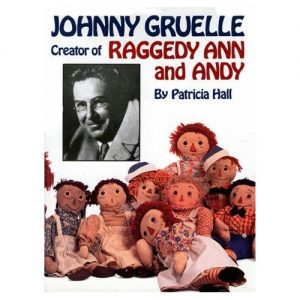 Then tragedy struck.  In August of 1915, Marcella was given a vaccination at school.  Shortly afterward she became very ill.   Her parents blamed the vaccination.  According to Johnny’s grandson Kim Gruelle, Johnny “spent as much time as he could by Marcella’s bedside, creating stories based on her childhood toys and dolls in hopes of lifting her spirits.*”   Sadly Marcella died “in her father’s arms” on November 8, 1915.  She was 13 years old. 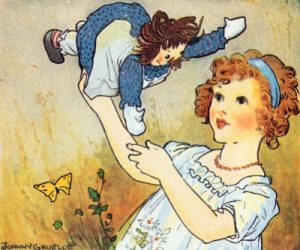 Three years later Johnny published his first collection of Raggedy Ann stories, based on the ones he used to tell his daughter.  Beautifully illustrated, full of joy and spirituality, it is obvious that Marcella was his inspiration.  Johnny went on to write more than forty books about Raggedy Ann and her brother Raggedy Andy.  The books are variously illustrated by Johnny, his brother Justin (uncredited) and Johnny’s son Worth Gruelle. 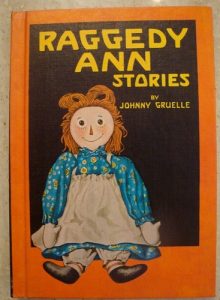 In 1929, fourteen years after her death, Johnny wrote and illustrated a book in tribute to his daughter called, “Marcella – A Raggedy Ann Story.”  It is similar to his first book, “Raggedy Ann Stories,” in that it is filled with beautiful illustrations of his daughter along with stories about her and her dolls.  In particular, there is a story that is very moving.  In “Through The Door,” a dog describes how her little boy owner has died.  The dog has become very ill herself.  Shortly after relating her story, the dolls get to witness the magical arrival of fairies who reunite the little boy with his dog.  “He dropped to his knees and caught the mama puppy dog close to his heart ..Then as the fairies with their soft light and the lovely low singing floated out and around the little boy and the puppy dog, Raggedy Ann sat down in the doorway of the dry-goods box playhouse and her shoe-button eyes were shiny with happiness.”  One can imagine Johnny picturing his beloved daughter in fairyland surrounded by “soft light and lovely low singing.” 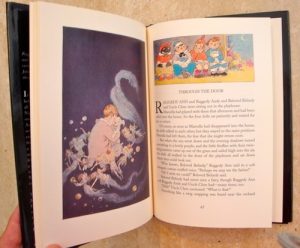 The Raggedy Ann and Andy books are full of love.  They are also full of adventure, magic, good will and lots and lots of sugary treats!  It is amazing how many cookies  and ice-cream-sodas those two dolls could put away!  It is no wonder that children love to hear these stories read aloud and imagine that they too are in “The Deep Deep Woods” or friends with “The Camel with the Wrinkled Knees.”  Johnny Gruelle turned the tragedy of his daughter’s death into a gift of love for generations of children, all told through the twinkle of a shoe-button eye and a candy heart. 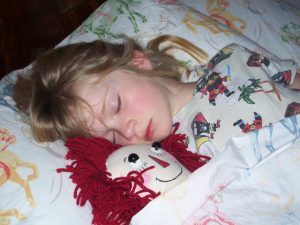 *  From the Forward written by Kim Gruelle in the book, “Marcella A Raggedy Ann Story” by Johnny Gruelle, Simon & Schuster Books For Young Readers, 1999.